The future of food may be cooking with chemical compounds

French scientist Herve This, the co-creator of molecular gastronomy, wants the world to cook with chemical compounds, a process that he believes can help improve global food security.

His pioneering technique seeks to deconstruct ingredients such as meat and vegetables into individual chemical constituents like lipids and amino acids. Called note-by-note cuisine, it’s based on chemistry processes — think fractionation, extraction, reverse osmosis and mixing.

After identifying the fundamental chemical make-up of dishes, This then mixes those raw compounds to reconstruct the essence of traditional dishes. Steak, for example, is a combination of protein, water, colourants and powders; salt is sodium chloride while garlic is basically benzyl mercaptan. The final edible product is typically made up of foams, gels and oils with the added bulk from coagulation that occurs during cooking.

Using chemical compounds will not only prevent food spoilage that occurs during the transportation of crops and animal products, it can feed more people, help farmers stay profitable, and save energy by reducing the use of fridges, according to This. 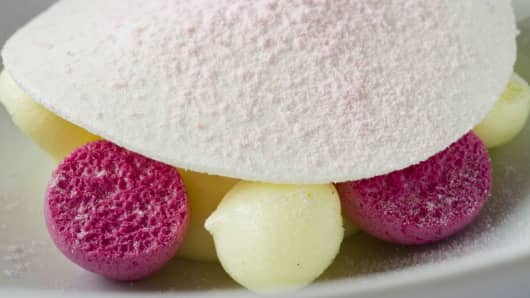 Pierre Gagnaire and Herve This
A Note-by-Note meringue dish called ‘Wind Crystals.’ Made from protein, water, egg white and flavouring.

“Science is so powerful that I can make one new food every month for 20 years,” This told CNBC in Singapore. Because most ingredients possess a variety of compounds, there is an infinite number of chemical combinations to invent new dishes, he explained.

The 63-year-old turned to music for a comparison: “In old times, people played the violin and now, we make electronic music with synthesizers but the synthesizer doesn’t aim to recreate a violin sound, it makes another sound.”

To the layperson, note-by-note cuisine seems similar to molecular gastronomy, in which chefs use scientific processes such as specification to transform traditional ingredients. But that’s not the case, according to This, who says the note-by-note method is entirely different because it relies solely on chemicals while still using classic and molecular cooking techniques.

Ultimately, he wants households to replace spice racks with cupboards of glucose, piperine, amylose, tartaric acid and other compounds that he hopes will eventually be available in supermarkets.

A Personal Blog of Abel Prasad

A Personal Blog of Abel Prasad