Facing a constant threat of rape and harassment, the women of New Delhi fight back

New Delhi (CNN)The women, dressed in colorful saris, giggle as they arrange themselves into rows.
It’s Friday morning in a small apartment in southern Delhi, where about 45 women ranging in age from 28 to 50 are forming orderly lines.
These women are not waiting in a queue or getting ready for yoga; they are preparing to fight.
Authorities in India’s capital are increasingly trying to train women to survive the hostile and dangerous environment they continue to face on its streets after a series of highly publicized rapes rocked the country.
India was also named the most dangerous country in the world to be a woman in a recent survey by the Thomson Reuters Foundation.
This vital form of defense training is led by the Delhi Police Department, which has been conducting self-defense classes across the city since 2002. 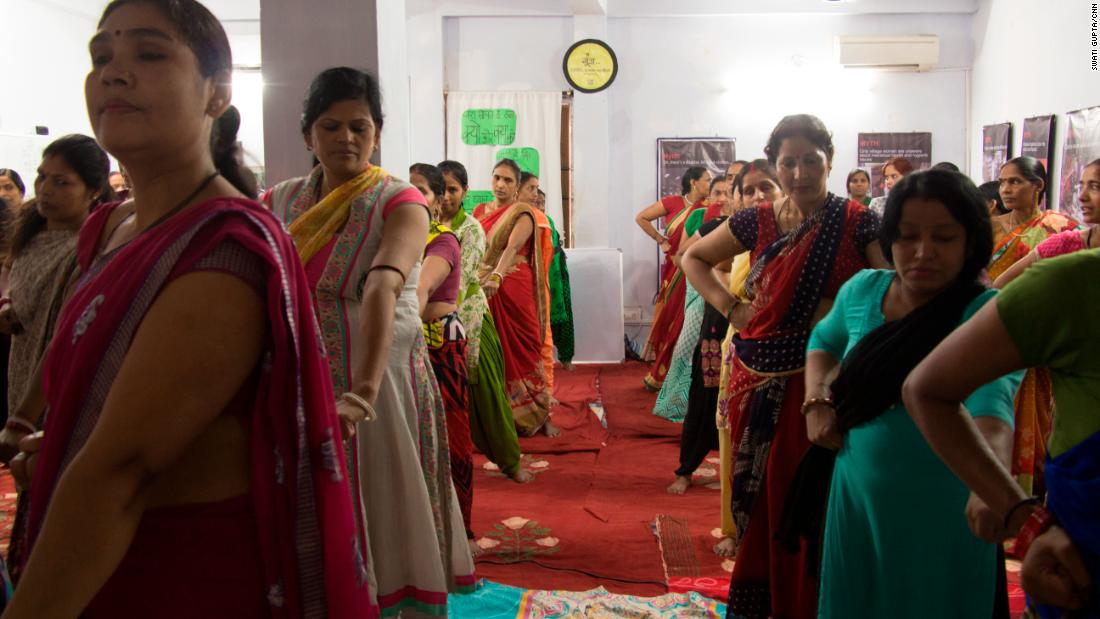 Indian women at Goonj practice self-defense moves in New Delhi, India.
The two-week sessions have become the subject of growing demand in recent years, especially since the 2012 gang-rape of college student Jyoti Singh.
They are organized by Goonj (which means “echo”), a nonprofit that collects donations for flood or earthquake victims.
Aisha Ahmad, 28, a seamstress for Goonj, says she was happy when the classes were announced.
“I decided that whatever life I have left, I want to live it well and teach my kids the same,” she said.
With two daughters, ages 6 and 7, Ahmad does not consider the classes limited to her.
They are a gateway to much-needed security for her daughters. 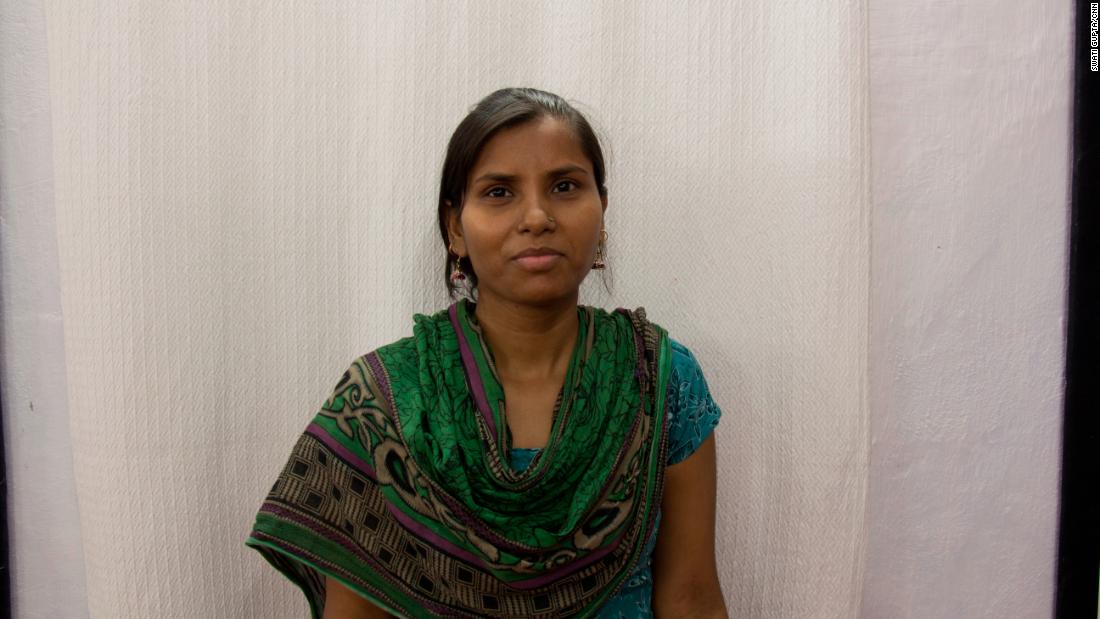 Aisha Ahmad, a 28-year-old seamstress and mother of two girls, is learning how to defend herself.
Standing at the back of the class, she watches as women are taught how to make a fist and build up momentum for maximum impact.
The instructors go through multiple scenarios these women might face in public, such as when traveling on a bus where a man attempts to rub against them or put a hand on their shoulder.
The responses include shouting more effectively, basic momentum-building exercises in which the women are taught how to inject power into their arms and deliver a force-filled punch, and learning the best way to break someone’s arm, a maneuver that was accepted with appreciative murmurs and grins.
As they pause for a moment, Ahmad gently corrects the stance of a middle-age woman in front of her. She guides one fist to the woman’s waist and pushes her arm back to show how to build up the strength to deliver a punch to the stomach.
One of the youngest in the class, Ahmad is able to follow the directions with ease. She giggles as the instructors lecture other women for forgetting their stance and for not raising their arms at the right height so as to elbow a man effectively in his stomach.
“Stop laughing. What will you get with laughing?” asks Poonam Yadav, 29, one of the two female instructors from the Delhi Police.

‘No one gives any respect to women’

Women make up about 48% of the 1.2 billion population in India, yet they have faced the risk of sexual assault for decades.
In 2016, over 58,000 rapes were reported across India, according to the National Crime Records Bureau, a dramatic increase from over 33,000 that were reported in 2012. In Delhi, almost 4,000 sexual harassment cases were reported that year, as well as more than 80,000 harassment cases nationwide.
Many activists say that things have become more problematic in recent years, as women are too often taught both culturally and socially to remain invisible.
In many cities and most of rural India, girls are told not speak in front of men, they have to ask for permission before they leave their homes, and married women are not allowed to leave their homes without their husbands.
The changing dynamics, with women increasingly entering the work force, have them navigating a sphere where men have otherwise dominated for generations.
For a majority of women, it’s become important to learn how to keep themselves safe as they move from small towns and villages to cities. For example, women don’t stay out after dusk and quickly learn that security comes when traveling in groups.
Now, they are learning to protect themselves. 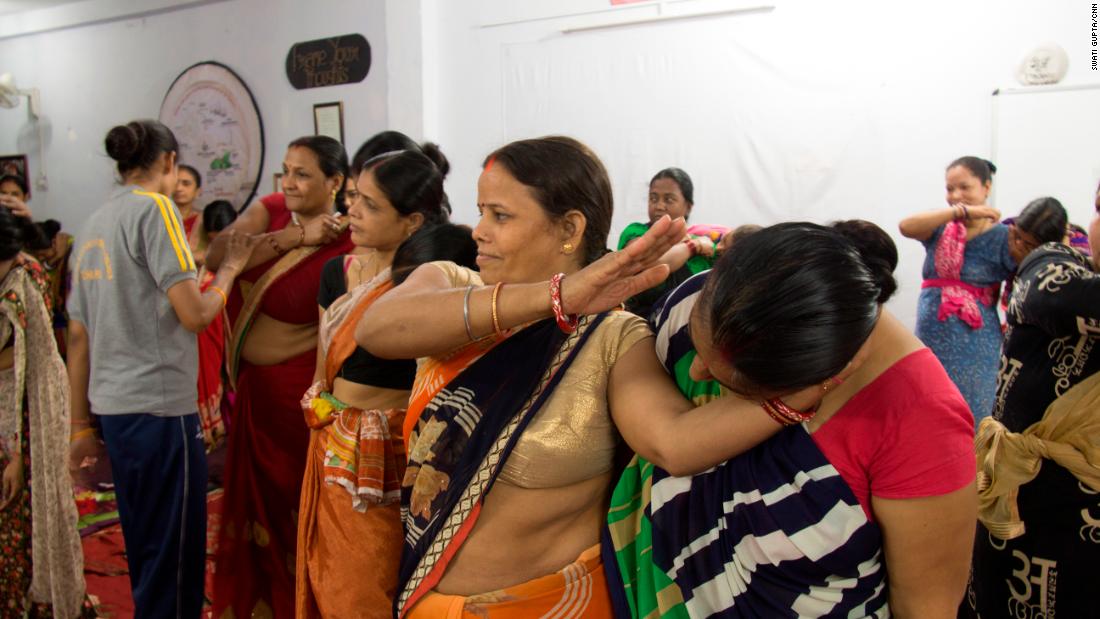 Women learn how to incapacitate an attacker in New Delhi, India.
The two instructors in the south Delhi apartment have been conducting classes in the city for about four years, patiently teaching women and girls of all ages. The training includes basic confidence-building exercises, filling their lungs to scream If they sense trouble, and maneuvers for specific assaults in buses or as they walk along streets.
The instructors walk along the rows, correcting each woman’s stance, and reprimand them for not remembering the previous day’s instructions. The admonishments are followed by a repetition of the instructions; the teachers must remind themselves repeatedly that they are teaching mostly middle-age women.
“They are old, and they forget easily,” Yadav said.
She wants the women to remember a little of their training if they find themselves in a difficult situation. “When they need it, maybe one percent of their brain will remember,” she said.
Outside the sessions, Yadav works in the self-defense section of the Delhi Police. She practices new moves with her colleagues and trains for the next day’s classes.
“I think of the good work I am doing. Maybe someday, it will save a life,” she said. 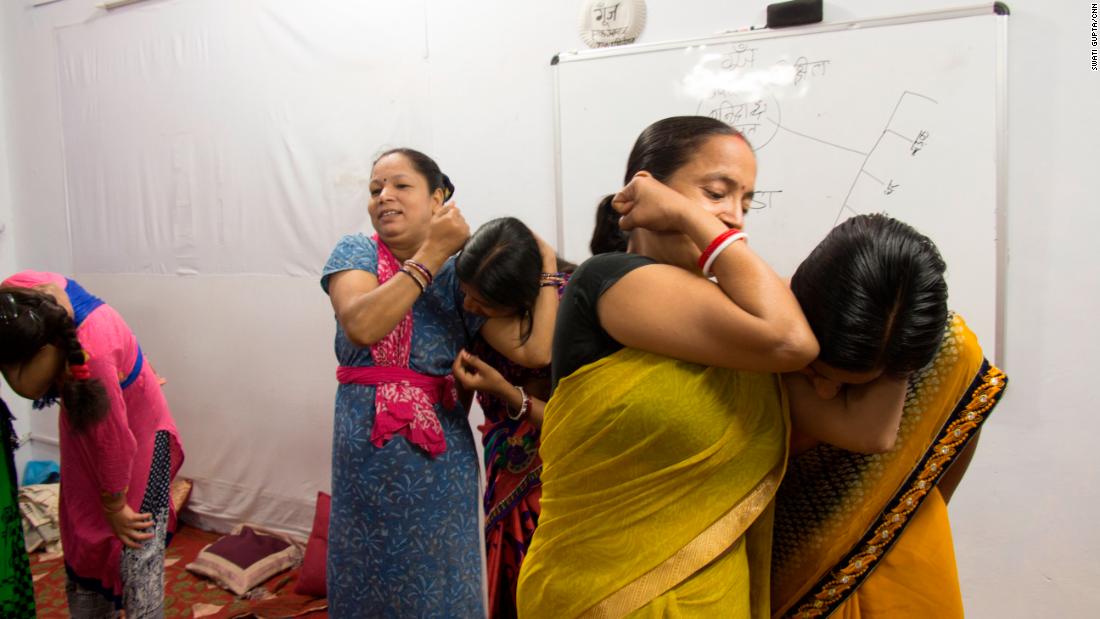 Trainers from the Delhi Police teach women how to fight an attacker if he approaches from behind.
Ahmad wants that, as well. She wants to ensure that her daughters remain safe — and alive.
It hurts so much when to give birth, she said. “It would hurt even more if something happens to them.”
A spate of rapes of minors has dominated headlines in recent weeks. In the northern state of Jammu and Kashmir, an 8-year-old was allegedly drugged and raped for days before being killed. More recently, in the eastern state of Jharkhand, a 16-year-old was reportedly gang-raped. When the matter was reported to the village elders, her parents were allegedly beaten by the suspect, and the girl was set on fire and killed.
In another case in Jharkhand, a minor was allegedly raped and set on fire. She is being treated in a local hospital.
“It is not about one case. It is happening everywhere. No one gives any respect to women,” Ahmad said.

Just 5 miles away, a self-defense class for girls ages 13 to 17 is about to end at the Jamia Islamia school.
About 60 girls, dressed in their school uniforms, perform each defensive move with ease and grace. Their instructor, Samishta, a police officer, nods in approval as each girl moves with purpose.
The girls stand in neat rows, and as Samishta shouts instructions, they move in sync, taking stances and defending themselves against invisible attackers. They have memorized every move and perform each without error. 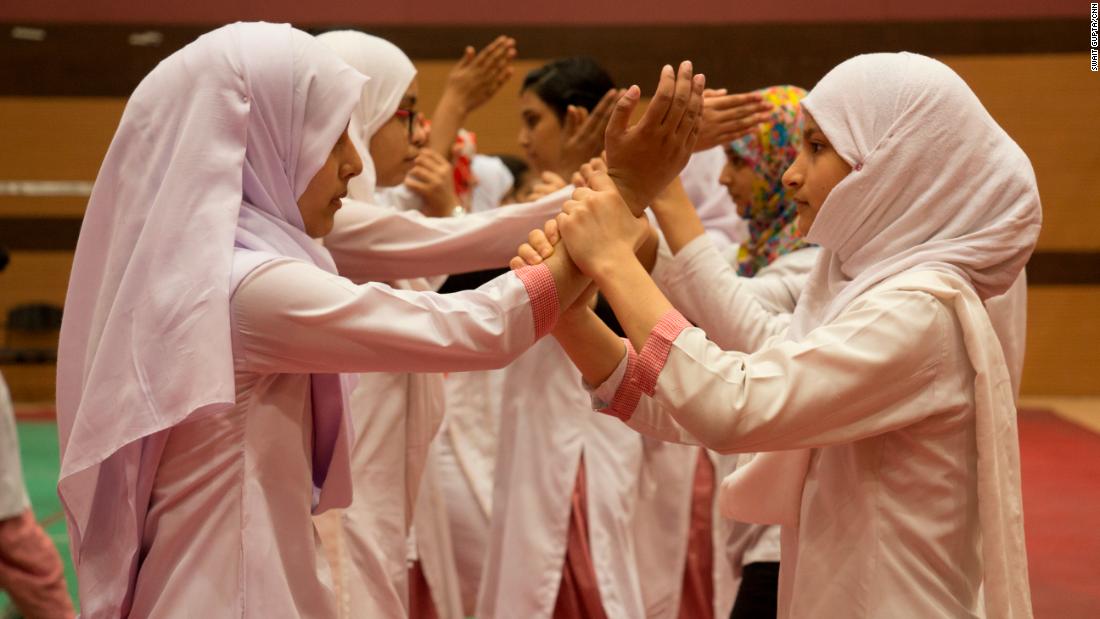 Schoolgirls practise a move to ward off an attacker if approached from the front.
However, these girls are being taught different moves from the women across town. They are learning how to use a pen or a notebook as a weapon if they are attacked by a stranger and how to incapacitate a man who tries to grope them on the bus or subway.
“We [have] gained confidence that we can save ourselves,” said Sadia Habib, a 14-year-old student. “People think women are weak; now they won’t be able to.”
Habib lives in a hostel next to the school and leaves campus to visit her parents or go into the city with friends.
Her parents encouraged her to take the classes so she could gain confidence when she is alone. She has been learning self-defense for the past 10 days and feels confident that she can now protect herself. 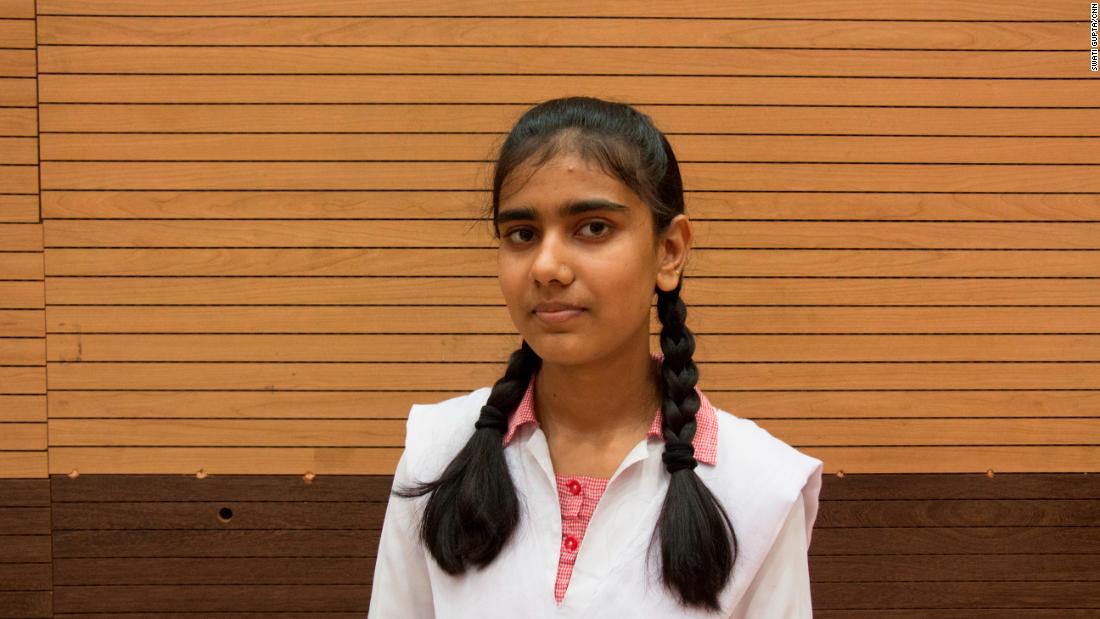 Sadia Habib is a student at a New Delhi school and is learning to protect herself.
However, the instructors are doubtful of whether their pupils will be able to execute the moves properly when they must. They might encounter more than one man, or they may forget the instructions, but the instructors hope the girls will remember something.
“This may be a temporary thing for [the] short term, but it is not useful in the long term,” said Ranjana Kumari, director of the Centre of Social Research, a nongovernmental organization focused on gender equality in India, which connects people and organizations to the classes.
Something should be started to educate boys in society. The focus is too much on women, she added.
“I feel this is something that is ideologically putting the onus of responsibility on women. You blame the women. You ask them to wear different clothes, not to go out and now to take these classes,” Kumari said.
Follow CNN Health on Facebook and Twitter

The Delhi Police classes have seen an increase in requests from schools, nongovernmental organizations and colleges across the city over the past few years. They have been receiving letters from people and organizations requesting their classes on a daily basis, and more students have been joining the classes.
About 50 trainers teach two classes a day (mostly in pairs), five times a week. Delhi Police have given more than 4,130 classes since 2002.
As the girls finish their last session and wave at Samishta, she recalls a moment when three former students told her about their response to being harassed by two boys catcalling them on the street.
“The three girls together beat up the two boys, who finally had to run away.”