I had to share this article when I saw it on news.com.au.

A NEW kind of high-end, private club is launching in Australia, and it’s nothing like the old-fashioned gentlemen’s clubs.

WHEN women started jetting into Sydney from interstate and overseas for exclusive, risqué women-only sex club parties with dress codes like “lace and latex”, the Skirt Club knew it was time to spread its wings.

In just two years since starting its secretive, sexy and luxurious private parties in Sydney, the Skirt Club — the all-female sex club for lesbian, bisexual and “plain curious” women — had seen its membership swell to 600.

Tonight it launches in Melbourne, and is expecting 50 women for an invitation-only evening of bubbles, burlesque by Ferri Maya, and a chat about “the ancient art of women pleasuring women” from sexpert Ruth Ostrow.

And after that, who knows?

Melbourne is the latest city to embrace what Skirt Club members worldwide already know, says founder Geneviève LeJeune — some women want a safe place to “experiment” or “play” with other women, and see what all the fuss is about.

Skirt Club runs two levels of events. First is Mini Skirt, a monthly, try-it-on-for-size, post-work social event, usually in a bar, where newbies basically meet other women, sip champagne and cocktails, maybe catch some burlesque, network, exchange numbers and see what the concept is all about.

The second level is the more risqué Skirt Club: play parties, held about every six weeks, usually at private homes, which feature themes more bubbly, and sexual play: basically anything from straight out bonding to burlesque dancing, body shots and bondage, as Skirt Club co-director Renee Nyx told news.com.au in 2016.

As word spreads, so does the membership interest.

Certainly that was the experience in Sydney, says Ms LeJeune, in Melbourne for the launch of the newest club.

“Since we launched in June 2016 we have hosted parties approximately every three months,” she said.

The ‘lace and latex’ theme nights are some of the most popular for Skirt Club.

“Our networking Mini Skirt events have proved to be just as popular as the signature events.

“In our first year we sold out of tickets for every event. It was quite full-on initially and we had a huge influx of applications to join the membership.”

The Skirt Club was founded by Ms LeJeune in the UK in 2014. The aim, she says, was to promote glamour, performance “and much more — away from the prying eyes of men and facilitate one night of consensual experimentation: no consequences, no questions”.

“It’s about doing what excites you,” she says.

Skirt Club has strict approval, membership and confidentiality requirements: The first rule of Skirt Club is you do not talk about Skirt Club.

Other stringent restrictions of no men, no pictures, no telling and no pressure mean the club generally gets new members “by word of mouth”.

“It’s important that we grow a trusting and safe community,” Ms LeJeune says.

Certainly someone’s been singing its praises. Ahead of its first Melbourne event tonight, Skirt Club Melbourne already has 100 members.

“We would imagine the membership to grow the same way it did in Sydney as we begin to roll out our 2018 schedule,” Ms LeJeune said.

When women started flying in from Brisbane, Tasmania, Melbourne and even Auckland to the Sydney events, Ms LeJeune knew it was time for the club to expand its presence in Australia.

Since its UK debut, Skirt Club has expanded into New York, San Francisco, Miami, Berlin, Vienna, Sydney and Shanghai, and boasts a seriously slick and sexy website, and social presence via Twitter and Instagram.

“We decided upon Melbourne as a significant number of women were jetting in for the weekend to attend our [Sydney] events,” she says.

“It seemed logical we should open there. Two of our members had solid experience in luxury event management and offered to head up the 2018 program for Skirt Club Melbourne. We enjoy involving our members in the growth and development of our community.”

The Chocolat Noir party will be held in a stunning, loft-style penthouse, complete with swing suspended from the ceiling and a spa bath, Ms LeJeune said.

Entry will be via a “very Melbourne” graffiti-covered laneway. 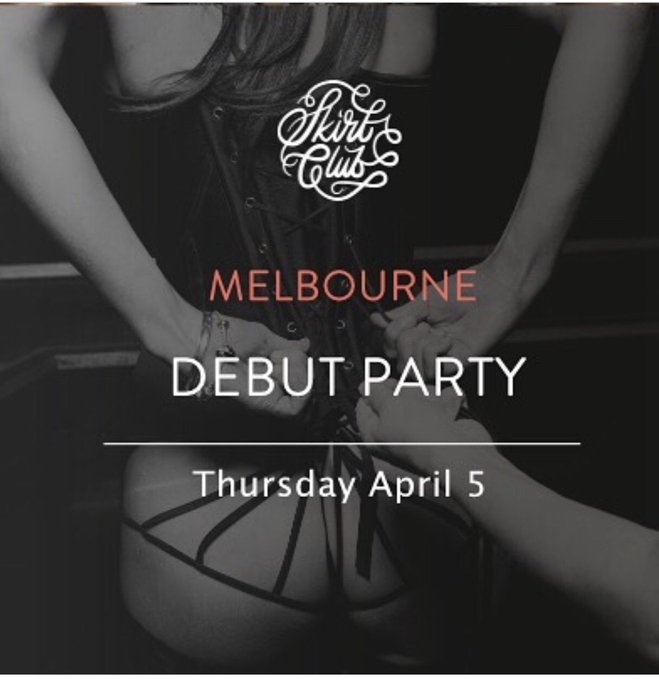