The elephant, one of the most majestic animals in the world and we treat it like a commodity.

Once common throughout Africa and Asia, elephant numbers were severely depleted during the 20th century, largely due to the massive ivory trade. While some populations are now stable and growing, poaching, conflict and habitat destruction continue to threaten the species.

The largest land mammal on earth, the African elephant weighs up to eight tons. The elephant is distinguished by its massive body, large ears and a long trunk, which has many uses ranging from using it as a hand to pick up objects, as a horn to trumpet warnings, an arm raised in greeting to a hose for drinking water or bathing.

Led by a matriarch, elephants are organized into complex social structures of females and calves, while male elephants tend to live in isolation. A single calf is born to a female once every 4-5 years and after a gestation period of 22 months—the longest of any mammal. These calves stay with their mothers for years and are also cared for by other females in the group.

The two species of elephants—African and Asian—need extensive land to survive. Roaming in herds and consuming hundreds of pounds of plant matter in a single day, both species of elephant require extensive amounts of food, water and space. As a result, these large mammals place great demands on the environment and often come into conflict with people in competition for resources.

Today, the most urgent threat to elephants is large-scale poaching to supply the illegal ivory trade. Other threats facing elephants in Africa and Asia include conflict with humans and habitat loss and degradation.

WWF advocates an end to commercial elephant ivory sales in the US and other major markets like China, Thailand and Hong Kong as the most effective and efficient solution to end this illegal ivory trade.

Elephants are also losing their habitats—and ancient migratory routes—due to expanding human settlements, plantation development and the construction of infrastructures such as roads, canals and pipelines. As a result, the level of human-elephant conflict rises as elephants are forced to try access resources.

In 1989, the Convention on International Trade in Endangered Species of Wild Fauna and Flora (CITES) banned the international trade in ivory. However, there are still some thriving but unregulated domestic ivory markets in a number of countries, which fuel an illegal international trade. Poaching to meet growing demand from affluent Asian countries is driving up the rate of poaching. In some countries, political unrest contributes to elephant poaching.

REDUCING CONFLICT BETWEEN PEOPLE AND ELEPHANTS 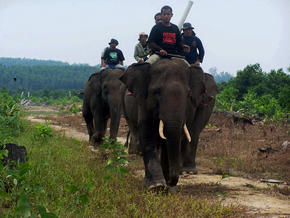 WWF has trained elephants and local people to form a “flying squad” that drives wild elephants away from farms and back into the forests.

To increase public support for elephant conservation by reducing conflict, WWF helps train wildlife managers and local communities to use modern methods and tools to mitigate human-elephant conflict. We mobilize communities to help protect their crops through elephant monitoring to provide early warning systems, erect fences where required and educate communities to reduce conflict through behavior change. Our long-term goal is to put in place proper land use planning that gives elephants space for seasonal movements, combined with fences to protect crops and infrastructure. On the outskirts of the Tesso Nilo forest, WWF has trained elephants and local people to form a “flying squad” that drives wild elephants away from farms and back into the forests. In Namibia and Kenya, we help people benefit from living alongside elephants and rhinos through wildlife tourism.

Rangers and community-based operations are on the frontlines of the fight against wildlife crime and WWF helps train and equip them. In Mozambique, WWF helped the government establish Quirimbas National Park to conserve more than 2,300 square miles of miombo woodland and its resident elephants. WWF trained park guards in elephant monitoring and antipoaching techniques and works with communities to mitigate conflict with elephants.

At the borders of Lao PDR, Cambodia, and Vietnam, WWF trains, equips and supports local staff to patrol protected areas and assess elephant distribution and numbers. In Lao PDR, WWF works to conserve the largest elephant populations in Indochina. In Vietnam, WWF worked with Fauna and Flora International to develop a national elephant action plan, which was adopted by the Vietnamese government in 1996.

WWF works with elephant range state governments, local people and non-governmental partners to secure a future for this powerful symbol of nature by thinking beyond protected areas. We advocate for large conservation landscapes like KAZA, the largest transboundary conservation area in the world. Home to almost 250,000 elephants, we work to maintain this space to provide elephants freedom to roam.

How you can help?